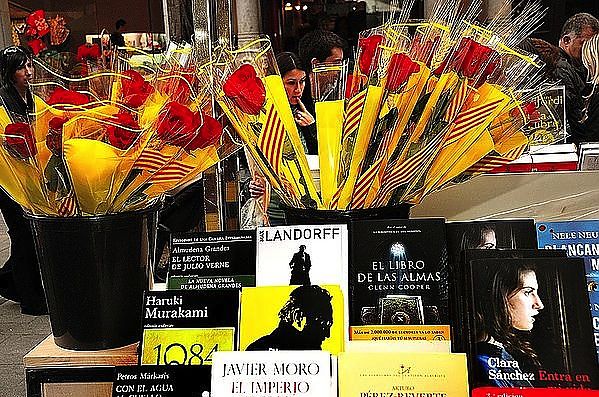 In Catalunya (Empuriabrava, Roses, Costa Brava) we celebrate on the 23rd of April, Saint George's Day.
The day of Roses and Books and the protector of Catalunya. This day is for the Catalan people like Valentines Day is for the Spanish. Its normal that on this day the couples give each other a Rose and a Book. In olden times the man would give his love a rose and she would give him a book. Through the years this tradition has changed. Both can give each other a rose and a book, but also friends, work colleagues and family members can give each other presents. The rose shows that you treasure the other person and it is also a symbol of love. But in Catalunya it is not only a day of lovers. It's a day of Love, Literature, Culture, Celebration, Colour and a day of Patriotism. It is a day of celebration which is unusual in the world because it is a day of celebration for the Catalan People even though it is a work day. Saint George is not only the patron Saint of Catalunya but also of England, Aragon, Portugal, Lithuania, Greece, Russia and many other lands.

On this day all the streets and squares all over Catalunya are decorated with Catalan Flags and everywhere you will see books and roses. What does the Rose symbolize: Red, the colour of the Rose stands for warmth of love. The corn symbolizes fertility. The National Flag shows a deep pride in their National History. The tradition has existed since the 15th Century. Saint George is the protecting hero of the Catalan People, who slayed the dragon and rescued the Princess. The symbol of winning against bad. Saint George came just as the Dragon was about to swallow the princess, he fought against the dragon and killed it. Out of the flowing blood of the Dragon on the ground, grew a rose bush with Red Roses. Saint George cut the most beautiful rose and gave it to the princess to show his love for her.

The Catalan Government passed a law on the 17th of April in 1456, that the 23rd of April should be a National Holiday. 200 hundred years later in1667 Pope Climent the 9th declared that day as a holiday even though since then it has become a normal working day. For a long time one could see theatre productions over the story of Saint George, as well as dances and processions. The day of the Book was originally the 7th of October, the birth date of Miguel Cervantes. Later in 1930, the date was changed to the 23rd of April, the date of his death. Since then in Barcelona and Catalunya the date which is shared by Saint George and Cervantes is celebrated as a holiday. You will see book stands in the street, squares in the villages and towns will have musical, theatre and dance productions.

The 23rd of April is not only the date of Miguel Cervantes death but also William Shakespeare and the renowned Catalan author Josef Pla. In 1995, UNESCO named this day, the Worldwide Day of Books and the Rights of Authors. Thousands of books and millions of Roses are sold in Catalunya on this day. One will see many roses and book stands where authors will autograph their books or write a small note. The best is the tradition on the Ramblas in Barcelona where the books are sold cheaper on this day but the roses are not.

So, if you are on vacation in Empuriabrava or on the Costa Brava, in your house, villa or apartment for Sant Jordi, it's a good occasion to buy a book on this day, and don't forget the rose to give to your personal prince or princess to show them your friendship or love.