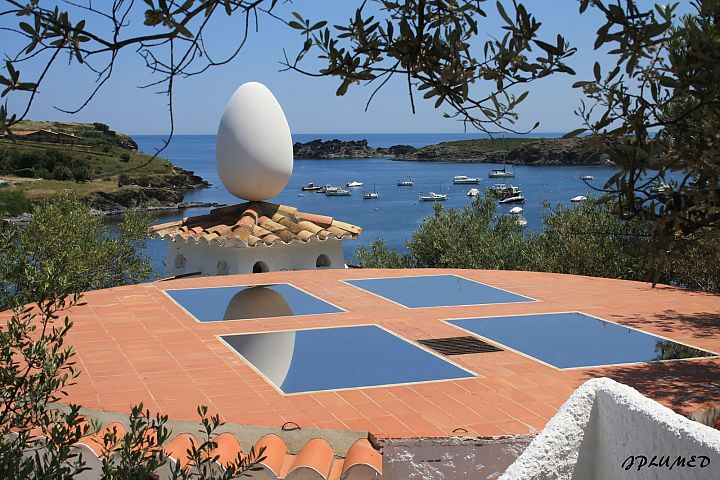 Enjoy your apartment or house in Empuriabrava or Rosas, by visiting the house of Salvador Dali in Portlligat (Costa Brava)

Portlligat, a small village by the sea, where very few houses, villas and apartments were built, near Empuriabrava and Roses. The present House-Museum of Salvador Dalí in Portlligat, Cadaqués, was once the haven and fixed abode of the artist from the Empordà.
It was there that he lived and worked until moving to his castle in Púbol in 1982, the last site of his creativity and the mausoleum of his muse and wife Gala. The everyday life of the artist took place within the four walls and olive groves of this property, except for the winter months, which he used to spend in Paris or New York. It was only between 1936 and 1948 that, due to the Spanish Civil War and Second World War, Dalí left Portlligat.

The foundation stone for his profound relationship with Cadaqués had already been laid during his childhood. He spent every summer with his family in their house by the sea in Es Llané. In his writings, especially in his autobiography ‘The Secret Life of Salvador Dalí’ and the diaries of his youth, Dalí repeatedly recalled happy days in Cadaqués, the place where he was able to develop freely as an artist, far from the everyday routine of his studies in Figueres. Thus no corner, however small, of Cadaqués was unfamiliar to him. His desire to become an impressionist artist from childhood on drove him to seek the colours and light of this unique landscape, and it was in Portlligat that he found them. The conversion of the fishermen’s huts of Portlligat into Dalí’s main atelier, completed in 1929, was partly the consequence of his love affair with Gala. A 22-square metre fisherman’s hut was first their home, which then – during the course of the following forty years – became a house suited to her own personal needs. “Like a biological structure(…) a new cell, a new room is added by every new life impulse”, was how Dalí defined his construction, a labyrinth, starting from the “vestibule of the bear”, so broken up and convoluted, and connected by endless corridors, small steps and cul-de-sacs. These premises are filled with countless objects and souvenirs of Dalí: carpets, fragrant blooms, velvet curtains, antique furnishings and much more. Furthermore, all the rooms have windows, with different forms and proportions, which frame the landscape and atmosphere of the bay of Port Lligat like a picture.

The house is divided into three functional areas. The first is devoted to the private life of Dalí and includes the winter garden, library, the oval room, bedroom and bathroom. The studio and dovecote form Dalí’s creative refuge, where he concentrated on his creative activity. The inner courtyard and pool area are where Dalí presented himself to the public. In his studio, the artist, created many paintings, and many of them on a large scale, works that include the two versions of the Madonna of Portlligat (1949 and 1950), The Christ of Saint John of the Cross (1951), The Last Supper (1955), The Discovery of America by Christopher Columbus (1858-59), The Battle of Tetuan(1962), The Apotheosis of the Dollar (1965), Tuna Fishing (1966-67) and The Hallucinogenic Toreador (1969-70).

The opening of his private house as a museum, in 1997, gave the Gala-Salvador Dalí Foundation the opportunity, together with Púbol Castle and the Theatre Museum, to give those interested in art access to Dalí’s private world, at one of the most beautiful corners of the Costa Brava. The aim is no less than to allow visitors to experience a vast number of little details that will enable them to learn more about Dalí’s personality and his epoch. What Dalí has left behind him at every point in his home forms a biographical document: the pictures, the wealth of objects, which give us an insight into the artist’s creative process, the more than 3,000 books that make up his library, spread throughout the whole house, Gala’s omnipresence, manifested in numerous decorative elements and, last but not least, the light and landscape, which thanks to Dalí’s architectonic acumen, flows into and fills every nook and cranny of the house. As Josep Pla once said in reference to the house: “It does not only hold memories, passions, and idées fixes of its owner. There is nothing traditional, nothing inherited nor repeated nor copied. Everything is a personal, indescribable mythology”.